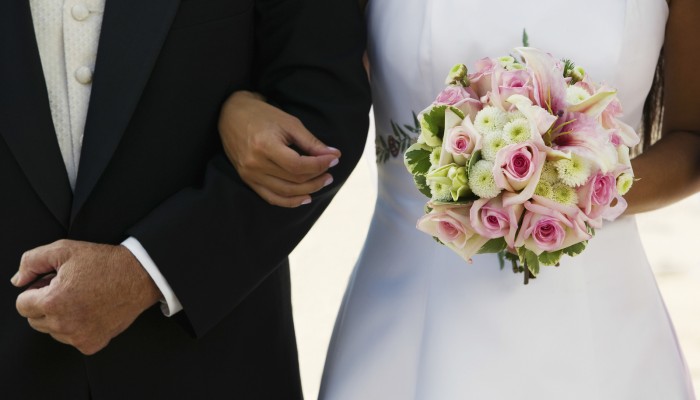 On the day my husband and I got married, one of the things at the forefront of my mind was what my dad would say during his speech.

During previous weddings I’d attended, one part of the celebrations I’d always loved was the part where the father of the bride stood up to share with the assembled friends and family the qualities he most admired in his daughter.

What was I going to hear from mine when he stood up in that role, I wondered.

Before I continue, let me tell you why that question was looming so large for me.

My dad’s an all-round good guy who worked hard to provide for his family, and who’s always gone above and beyond to do things for me and my brothers. I’m very grateful to him for that, I love him dearly and I always will.

But he’s never – to put it mildly – been one for expressing feelings. The words “I love you”? Not words that were ever spoken in the home I grew up in.

Because my dad had never complimented me on any aspect of my nature or character (but I’d often heard harsh words of criticism from him), as my wedding day approached, if I had qualities he admired, I had no idea what they were.

In her book The Age of Miracles, Marianne Williamson writes the following on the topic of women who didn’t grow up feeling adored by their dads (the point being that all daughters deserve to feel adored by their dads): “There’s a void where a genuine sense of her female self should be”.

I remember, as a young girl, feeling convinced that there was something wrong with me – something that made me deeply unlovable.

During my teens and the first part of my twenties, my way of dealing with this was trying, in every situation, to guess what would get me the other person’s approval so that I could do, say or be that.

Back to my big day…

By the age of 28, as my wedding day approached, I’d clocked up some achievements in life that made me appear successful to the outside world. But I’d never dealt with my low self-esteem and it didn’t magically vanish just because I looked like I had things together.

As I wrote earlier, when I thought about my dad’s speech I really had no idea what he’d say about me.

And yet at the same time I had faith that on this special occasion, in front of our closest friends and family members, I’d finally get the validation I’d been craving from him all those years. To say that I eagerly anticipated it would be something of an understatement.

So…the big day arrived, and let’s fast-forward to 6pm: speech time. When my dad stood up to address the room, I was on the edge of my chair.

An accomplished public speaker, he opened with a series of well-judged jokes and gracious thank-you’s. But some time into his speech, sure enough, he launched into some extremely heartfelt words of appreciation and admiration and even told the assembled guests, “I love her very much and I don’t tell her that often enough.”

But there was just one problem. He wasn’t talking about me at all during that part. That part of his speech was all about my mother, and with that tribute paid, there followed a few more jokes and then he was done and back in his seat.

My husband was the next to stand up and his speech was perfect and beautiful. But the sad truth is that the post-speeches part of our wedding day went by in a haze for me, and not a good one.

I doubt I could have articulated this at the time (and no one would have guessed it from looking at me) but my dad’s speech had so triggered all my childhood feelings of shame, worthlessness and inadequacy that I’d simply shut down.

As my close friend N (who’d sat between me and my dad that day) said to me on the topic recently, “Back then you won’t have been able to see it rationally. You’ll have thought it was because you weren’t good enough.

“You’ll have racked your brains, trying to figure out what you needed to change about yourself so you’d be acceptable to him. Was it that you needed to be more this? Less that? To work even harder than you had?”

Y.E.S.! That’s exactly what was going on for me, and maybe you can relate. Maybe you’ve also felt rejected by your dad, or by someone else, and been so knocked off your centre by it that you believed you should try and change who you are to get their approval.

If you felt rejected by your dad as you were growing up, you’ll have naturally assumed there was something wrong with you.

This is because the child’s brain has no way of filtering the messages it receives from Mum or Dad. It simply downloads them and in this way any negative messages we consistently received about ourselves from our parents became wired into our brains and nervous systems.

And it’s now being recognised that no single factor has a greater impact on the level of self-esteem that we, as women, grow up with, than the way our dad interacted with us as we were growing up.

I realise this might sound like bad news but understanding it is actually the first key to overcoming it.

If your dad didn’t consistently show you love and appreciation as you were growing up – if he didn’t, in fact, make you feel consistently adored – that’s not a sign that there was anything wrong with you.

It’s a sign that he had unresolved emotional issues which stopped him from being able to see and react to the beautiful being you were (and are) and meet your emotional needs.

And if you find that interacting with him still regularly makes you feel inadequate and knocks you off your centre, chances are he still has those same issues.

As little girls, we saw our dads as all-powerful superheroes. And even as women we can often forget that they are fragile, too, and that they were once children, too (and quite possibly children who were not shown enough love, even though they might never be able to tell us that.)

It’s also easy to forget that many boys, particularly of earlier generations, were taught that to be a “real” man is to be strong at all times, and never to show emotion. (That was certainly true of my dad, born in England in 1947.)

Let’s also remember that many men have no idea how important a father is to his daughter, because no one ever told them (all they were told to do as fathers was provide, and be strong…always strong).

Nor do many dads have any idea that when we stopped being cute little girls and started making the transition to womanhood, we needed them more than ever. Nor that we never stop needing them, no matter how old we get.

In short, your father’s “rejection” of you is not about you and never was.

And if you have low self-esteem because you felt (and still feel) rejected by him, getting the above – really getting it, not just intellectually but on the deepest level – is the first key to overcoming that.

I'd love to send you my mini guide 'Never feel "good enough"? Here's the first key to changing that'. Entering your details here will also subscribe you to the Father Daughter Factor newsletter – full of tips for healing from the effects of a painful father-daughter relationship.

Just one more step... Next time you check your email, there'll be a message asking you to confirm your subscription. Once you've done that, you'll be directed to your fab freebie 🙂 Sarah xo